The Investment Approach Antoine Walker Should Have Taken 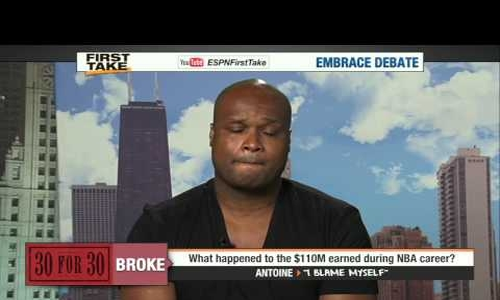 There is no secret that Antoine Walker was one hell of an NBA player. He played for the historic franchise Boston Celtics and Miami Heat. During this process, he made close to $110 million dollars. The question is, “How in the hell did he become broke?” I guess after a couple of big houses, exotic cars, and stupid spending habits, well, one can become broke. What he should have down is taken the investment approach that Ulysses Lee “Junior” Bridgeman took. He took $350,000 and turned it into $400 million dollars.

He was born in Chicago where he played basketball all through his high school years. He continued playing basketball throughout college at the University of Louisville, where he graduated with a Bachelor’s degree. Bridgeman was drafted by the Lakers in 1975, and he ended up being traded soon after to the Milwaukee Bucks. During his NBA career players didn’t have multi-million dollar NBA player contracts. Most of the players that made a lot of money received fortunes from endorsement deals.

In 1985 Bridgeman’s peak salary was $350,000 during the time he played for the Clippers. During the off seasons, Bridgeman started to plan for his future by learning the Wendy’s franchise business. He spent a lot of his time working at a local Wendy’s to learn the true culture of the company. At the end of his NBA career, Bridgeman owned three Wendy’s, and now he has over 160 locations. He also invested in the Chili’s franchise, owning more than 120 in America today. He even owns 45 Fannie May stores and also employees over 9,000 people.

Bridgeman is now the second largest Wendy’s franchise owner in the world. His contribution to his family started with his passion for basketball that transformed smart investments to immense wealth. Brickman has been married for 35 years showing his commitment to family and success. All three of his children have MBAs and are contributors to the family business.

Bridgeman didn’t worry about keeping up with the Jones. He invested all of his money wisely and bought assets that would make him more money. That is the lesson in this story. Antoine Walker chose to do the opposite and bought things that really didn’t have value. And secondly he didn’t have any income coming in after his NBA career was over. Case in point, you should make money to buy assets that make more money.